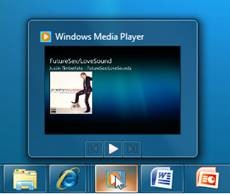 As an integral part of the move from Windows Vista to Windows 7, Microsoft has introduced a new model of interaction (the Natural User Interface), and delivered changes to the graphical user interface to accommodate the NUI. On the surface of the next iteration of the Windows client, one of the first traditional Windows components that was revamped was the Taskbar, which evolved into what Microsoft is internally referring to as the Superbar. According to Chaitanya Sareen, a senior program manager with Microsoft, the new Taskbar is designed to put users in control, and to streamline tasks such as program switching.

“The taskbar has undergone a facelift. We’ve enabled large icons by default. This affords a richer icon language, improves identification of programs and improves targeting for both the mouse and touch. Yet, one of the most important advantages large icons provide is a means to promote the taskbar as the central place to launch everyday tasks,” Sareen stated. “Somewhat of a visual trick, the taskbar is only 10 pixels (at 96 DPI) higher than its Vista counterpart (when used as a single row, since multiple rows are still supported, along with positioning around the screen edges).”

Even in Windows 7 Build 6801, the Taskbar remains transparent when a window is maximized, a characteristic that is also valid for the window's title bar as well. With the Quick Launch area killed off, Microsoft is allowing users to pin programs directly onto the Taskbar, via drag and drop, or through the contextual menu.

“We decided to standardize this behavior and have program launchers turn into window switchers when they are launched. Effectively, we unified Quick Launch and the taskband. While some other operating systems have similar concepts, one difference with our approach is that our default experience always optimizes for a single representation on the taskbar,” Sareen explained.

The new thumbnails delivered for the applications featured on the Taskbar have evolved consistently compared with Windows Vista, in the sense that they are now actual extensions of the Taskbar items themselves. In this manner, Microsoft introduced completely interactive thumbnails that also take advantage of the grouping capabilities of Windows.

“When the taskbar doesn’t offer enough information via text or a thumbnail, the person simply moves the mouse over a taskbar thumbnail and voilà - the corresponding window appears on the desktop and all other windows fade away into glass sheets. Once you see the window you want, just click to restore it. Not only does this make finding a window a breeze, it may also remove the need to switch altogether for scenarios in which one just needs a quick glance to glean information. [Aero] Peek also works on the desktop too,” Sareen said.

“Custom Window Switchers - all the major web browsers offer tabs and a method of managing these tabs. One could argue tab toolbars are really like taskbars since they facilitate switching. These TDI (Tabbed Document Interface) and MDI (Multiple Document Interface) programs have always resorted to creating their own internal window management systems as the Windows taskbar was not optimized to help their scenarios,” Sareen added.

When introducing interactivity to the Taskbar's thumbnails, Microsoft has taken it a step further than simply allowing users to click on the space. Thumbnail Toolbars now delivers a set of controls for a specific program, such as play, stop, and rewind in Windows Media Player. The right hand side part of the Superbar is also changed. First off, it is now used to accommodate the Show Desktop button, and, secondly, it hosts the good, old, but brand new and overhauled, and less nagging Notifications Area. Overlay Icons and Progress Bars are also new additions, allowing users to monitor the progress of a certain task via the icon on the Superbar.

“Color hot-track is a small touch that typifies the new taskbar’s personality. When a person moves [their] mouse over a running program on the taskbar, [they] will be pleasantly surprised to find that a light source tracks [the] mouse and the color of the light is actually based on the icon itself. We calculate the most dominant RGB of the icon and dynamically paint the button with this color. Color hot-track provides a delight factor, it offers feedback that a program is running and it showcases a program’s icon. We’ve always believed that programs light up the Windows platform and now, we’re returning the favor,” Sareen revealed.