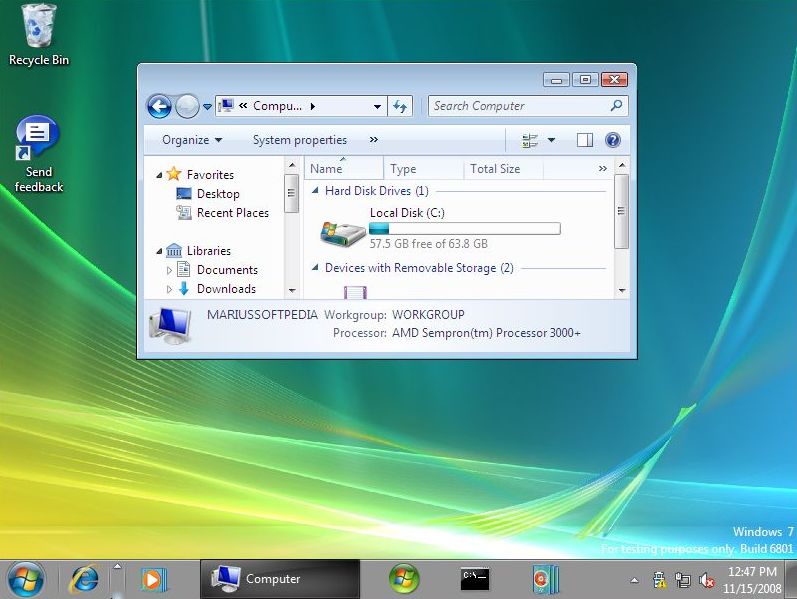 Microsoft promises to optimize the amount of disk space that Windows 7 will consume in comparison to Windows Vista. Essentially, the Redmond company is laboring to decrease the installation footprint of the operating system with the next iteration of the Windows client. While the software giant failed to indicate just how much occupied disk space it was going to shave off in Windows 7, it did inform that it was looking to have Windows Vista beat in this aspect.

"As we develop Windows 7 it’s likely that the system footprint will be smaller than Windows Vista with the engineering efforts across the team which should allow for greater flexibility in system designs by PC manufacturers. We will do so with more attention to defaults, more control available to OEMs, end-users and IT pros, and will do so without compromising the reliability and robustness of Windows overall," revealed Michael Beck, a program manager in the core OS deployment feature team.

According to Steven Sinofsky, senior vice president, Windows and Windows Live Engineering Group, the total amount of physical disk space used by Windows 7 needs to go down in order for the platform to be accommodated on SSDs. The introduction of solid-state storage into mainstream drastically limits the space available to the end user and ultimately to Windows itself. Microsoft aims to have machines with 16GB SSDs ship with Windows 7, and, given the current footprint of the operating system, it will be quite a challenge.

At this point in time, a clean installation of Windows 7 pre-Beta Build 6801 Milestone 3 takes over 6 GB of disk space. Vista manages to take hostage a similar portion of the hard disk, and in this context Microsoft has quite a lot of work to do to reduce the space occupied by Windows 7.

"Windows disk space consumption has trended larger over time. While not desirable, the degree to which it’s been allowed is due in large part to ever-increasing hard drive capacity, combined with a customer need and engineering focus that focused heavily on recoverability, data protection, increasing breadth of device support, and demand for innovative new features. However, the proliferation of Solid State Drives (SSDs) has challenged this trend, and is pushing us to consider disk footprint in a much more thoughtful way and take that into account for Windows 7